So today I begin the first official post of the blog, and the first post will be into the prominent group of international students referred to as “FOBs”. I’m sure most people know what this means, but if for whatever reason you aren’t familiar with the term, a quick Google or Urban Dictionary search should get you well acquainted with the meaning.

The University of Melbourne (UoM) is quite well known for its large contingent of international students. I’d estimate without the help of any official statistics that the overall cohort in my course (Bachelor of Commerce) was anywhere from 40-55% FOBs. This also varies with each major, with Accounting, Finance, Actuarial Studies and Economics taking the crown for having the highest FOB ratios. Marketing and Management, which everyone considers a joke, has a much lower FOB ratio. So, if you want people to talk to, then subjects which fall under these majors would be the prime choice.

Most of the FOBs at UoM, are from Asia, with the main countries being China, Singapore and Malaysia. I guess proximity with Australia has a bit to do with that. I wouldn’t imagine many Europeans travelling all the way to Australia to study when there’s a myriad of tertiary choices throughout Europe.

In my FOB series of posts I’ll cover a number of sub-topics. The first one is Fashion.

Dressed to impress
A fair amount of FOB girls, seem to dress quite well, some wearing dresses you would expect to see in nightclubs to classes. Often, this is accompanied with make-up overkill, neat hair, and zero preparation for class, which clearly reflects what the majority of their time is spent on.

These girls are often the club rats hitting up Asian night at every prominent nightclub around the inner-city with their fellow FOBs and are somewhat social.. Only in their mother tongue of course!

Fake Louis Vuitton bags are also huge within this crowd, considering most of the FOBs are from China, I’d expect a large proportion of these bags are fakes, but it’s all about appearances right?

I have a friend that falls under this category, she’s Asian but not FOB. Anyway, she lives on-campus and admits that she spends a solid one hour daily getting dressed for university. Whenever I don’t make a comment on her clothes/hair/nails/shoes she’ll bring it up with an open question like..
“What do you think of my hair?”
If a dull response is given, get ready for hell.

If it isn’t already obvious, most of the girls in this category just crave attention. I guess, in my opinion this group is alright, I mean at least they make an effort to look nice, even though most FOB girls aren’t exactly model material in the first place.

For the FOB guys in this category, they will often wear decent collared shirts, sometimes with casual ties and dark slim jeans or other fashionable pants. In winter, expect a coat, sweater or jacket over the top. Some wear will wear dress shoes too, which I think is a bit of an overkill when you’ll probably be walking around a lot between classes, but most will just wear Chucks or other more comfortable alternatives. Recently, I saw a FOB with khaki’s, boat shoes and a cardigan, first thing that popped into my mind was how “White” that FOB had dressed, but yes, there are some FOBs that will try imitating non-FOB fashion, maybe to stand out and confuse you?

The prominent brands in this category of dressers are things like Hugo Boss, Ralph Lauren, FCUK, Tommy Hilfiger and so on. Many will often wear clothing that openly shows off the brand logo, because appearances are everything.

Mid-tier dressers
These FOBs don’t put as much time or effort into dressing up as the aforementioned sub-category. There’s a strong emergence of American brands like A&F and Hollister amongst the mid-tier dressers.

A lot of them will wear rugby tops or hoodies with jeans. Hair may be a bit messier and generally clothes won’t be as well fitted. Common clothing choices within the mid-tier dressers will be almost the same for both males and females. A lot of FOBs fall within this category.

There are also hipster’s which fall within mid-tier and edge towards the dressed to impress crowd. Generally speaking, the hipster look for FOBs will contain the Hipster glasses, skinny black jeans, and maybe a checked shirt.

Scrub dressers.
These are the worst. Basically, they wear trackies and fleecies with runners. The FOBs that fall within this category are often too nerdy to have fashion sense or social skills and are also overly dedicated to their studies, which is cool, right?

Many of them will wear no brand clothes, or sports brands like Adidas, Nike, Puma and so on. There are also a lot of fake designer brands on their clothes with terrible fonts making the level of authenticity very obvious.

Basically, if you’re a dweeb-FOB then you will more than likely fall within this category. Also, many students doing Engineering or Science seem to dress this way.

For females, wearing leggings by themselves is such a trashy look, definitely a scrub look. 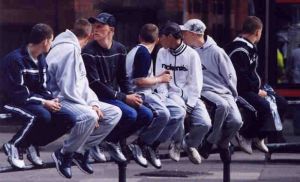 My advice, dress in whatever you’re comfortable in, but avoid dressing like a tramp regardless of comfort.

Of course, this post was a generalisation, so let’s not get all worked up over it, but most people that attend UoM will undoubtedly be able to relate to what I’ve written here.