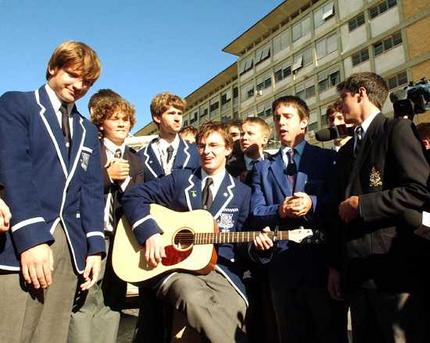 Today I’ll go over The Private Schooler. Yes, this is another stereotype which most students at the university will bump into.

The Private Schooler, as the name suggests the the breed of student that has attended a top private school, probably in the inner east or inner bayside areas and preferably also reside in these areas too. Common examples of these schools are Scotch College, Melbourne Grammar, Xavier College & Camberwell Grammar. The students will usually get a solid ENTER/ATAR score (Even the retarded ones will get a decent spoon-fed score) and have many friends who will end up at UoM with them, potentially doing the same course as them.

After being nursed through VCE with their hard-working teachers and strong school environment, many of the Private Schoolers come to UoM not really knowing what to expect. Often they herd together with common groupings being students of the same private school, nearby private schools, APS sports opponents, and sister schools.

A vast majority of the male students from this group will excel in sports (AFL, Rowing, Rugby etc.), be fit, and also quite extroverted. Many of which will not really bother studying throughout university too hard as their personality and general likeability will get them more success in life than dweebish nerds and fobs which basically dominate the university population. If not, the connections which they have attained through their social networks or their parents will probably be enough for them to land a decent gig after graduating.There are a few that do study hard and also have great people skills to go with them which generally mean they’ll end up in a true top tier position in no time.This will generally breed much envy from nerdy losers that tried harder academically but didn’t end up obtaining the same level of success.

In terms of Private School girls, they will often have strong self-confidence (Much of this depends on looks of course!) and also display many positive traits which are similar to their male private school counterparts. Again, just an observation, it’s not always the case, since generalising would be a crime now, wouldn’t it ?!

Many Private Schoolers will be spending their summers overseas in exotic locations, relaxing, while most other students will be lightening their future study load by undertaking summer classes or working hard in some role which they believe will enhance their prospects of success in the future. As usual, the Private Schooler will more than likely be more successful in attaining that dream job that these other students have been drooling over all throughout their university life.

In the workforce, Private Schoolers will generally go further up the corporate ladder than their fobby counterparts. By building close rapport with key people and allowing their non-work related conversation to dominate their perception, they will often not be as technically sound in the actual work as a socially-awkard dweeb but their personality will leave a good impression on the people that matter which will result in a greater level of success, in the majority of cases.

As much as people deny it, many senior roles have a strong preference for white people. Don’t start hating me for telling the truth, click the link and read calmly without raging.

12 thoughts on “The Private Schooler”