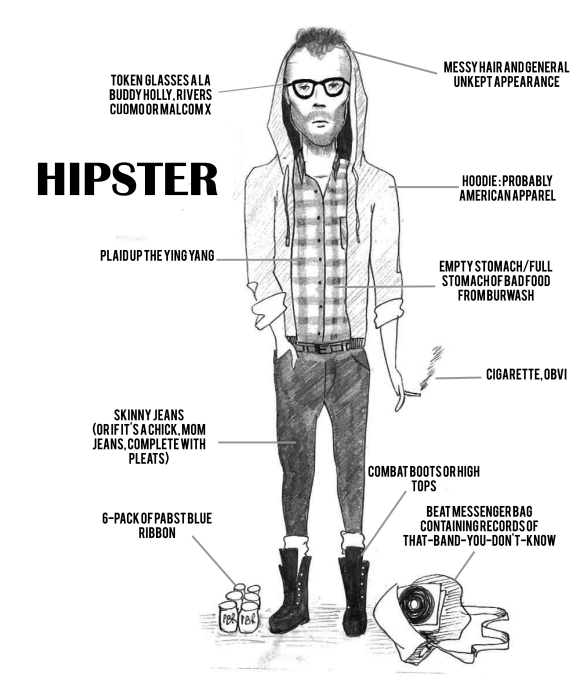 In Melbourne, there’s a common subculture within a few of the inner-city suburbs, Hipsters.  People who belong in this hipster category are concerned with their appearance substantially more than the regular person. Often they feel that they are “unique” and have an “alternative” vibe to them. It’s almost oxymoronic though as this expanding subculture seems to be rather homogenous amongst themselves.

Hipsters are often identifiable by the following characteristics:

Nowadays, you can just roll up to a hipster bar in places like Fitzroy or Collingwood with a daggy-looking clothes and firmly get accepted within their circle. Oh also, you might need to make some longer term cosmetic changes. First, grow out your hair and beard. Second, buy a couple deep v-necks along with a snug pair of jeans. It doesn’t have to be skinny jeans, but it shouldn’t be baggy in the 50 Cent style. Congratulations, you now have a basic look that will not be objectionable to the hipster “niche”

As The University of Melbourne is located close to the hipster hot-zones of the inner northern suburbs of Melbourne, it’s often quite common to see students that fall within this grouping. Most seem to be Arts or Science students however you’ll occasionally come across them from other courses.

One way to stand out from the other hipster guys without getting an even more depressing tattoo or being in some loser band is to have some muscles. Hipster dudes are frail with Holocaust style concentration camp bodies, so having a more athletic build—that your v-neck will undoubtedly highlight—will do a better job of being slightly unique within a largely homogenous grouping. Just don’t be jacked because hipster chicks don’t like that. Even though hipsters are obsessed with their look, making sure each strand of hair is strategically placed across their face, the trick is making it seem like you don’t really care. It’s tough but once you pull it off, you’ll know how it really feels to be a true hipster.

It’s odd, hipsters try hard to emit a care-free ambiance, however they are often some of the most self-absorbed people around, especially in a city like Melbourne.