6 Comments
By Inside The University of Melbourne Culture, Informational 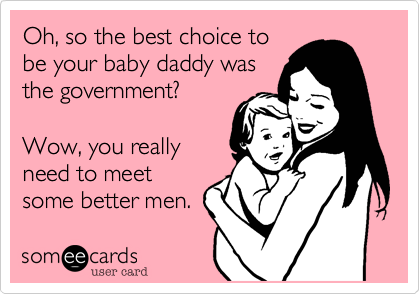 Are all you gals sexually empowered now? How’s the new feminist family workin out? Woman + children and man is seperate. Big Daddy done up and took his place. If a man’s got no rights to his family, don’t expect him to have obligations either. You gals are the head of the household now.

Big Daddy will suck every last penny from the serfs to satisfy your slightest whim. The vote is your’s and the western world is exactly the way you’ve created it.

If a precious woman cries sexual harrassment ya call Big Daddy to punish the bad man. Dontcha? Men stand up individually for themselves. Women run to the State and demand punishment.

Exactly like a spoiled little child, women walk around slutwalking and demand Big Daddy spend lotsa time and money to guard their precious feelings. Big Daddy says, “sure” I’ll take your money and bill it to the people. Next, these same moronic women tromp about in their idiotic wallstreet protest. None of them have a clue as to why anyone is poor, (think entitlements).

The man in the household has been replaced by the government.

In the past, a woman would need a man, to love her, care for her, to provide for her. In return she would look after the home, provide him with love, femininity, fertility and the currency of her youth. It was natural, it allowed for family formation and fostered a nuclear family.

Now, daddy government gives a woman a safety net for all her mistakes.

A woman gets drunk and fucks a random guy and feels guilt the next morning, not to worry, just cry RAPE! Daddy government will put that bad man away and ruin his life!

A woman raw dogs a random guy, gets knocked up with a bastard spawn. Don’t worry! You’ll be provided with child support and financial benefit from daddy government. Oh if they aren’t his, he can still pay child support for someone else’s kids too!

A woman does a garbage major with no job prospects, instead of getting good grades, she parties and sluts around through college. Time to look for a job! Oh it’s tough! Don’t you worry, daddy government has quotas for women in positions!

So what do we have now? Women that have been given unlimited mating choice, which unleashes their unconstrained hypergamy. What we ultimately face now are women that are showing the worst of themselves. They’ve become masculine in their attitudes, disfigured with tattoos and piercings, fat with their ruthless diets and unbearable with their entitlement.

Things will only get worse before they get better. I pity the next generation of men that are destined to put up with this degradation in the quality of their female counterparts. Is there much surprise that men are opting out of marriage? Many men would rather see their bloodline end than marry a self-entitled re-packaged whore that’s played musical man chairs through her peak and I don’t blame them at all.