How Cuckolded is Melbourne?

Australia, more specifically the city of Melbourne is potentially up there with heavily Cuckolded regions such as Scandinavia, US and Canada.

Recently, a thread posted in forum disclosed great areas to meet women, at most it’s locker room banter amongst men discussing their thoughts and outcomes at potentially meeting suitable women for dating. This is a normal phenomenon amongst humans.

Now the leftoid media in Melbourne has somehow linked (go figure how?!) asking a girl out to a string of violent murders that have taken place in Melbourne over the last year or so.

The source of this seems to be a freakshow feminist (Again, surprise!)

In 2019, making conversation with a girl as a heterosexual male is creepy, misogynistic and rape.

More stories have been published…

“Creepy guide on how to target women in Melbourne surfaces online”
https://www.abc.net.au/triplej/programs/…e/11165648

“If You’re Checking Out A List On Where To Randomly Approach Women, You’re A Jerk”
https://goat.com.au/feminism/if-youre-ch…ure-a-jerk

“A Supremely Grot Pick-Up Artist ‘Guide To Melbourne’ Has Been Reported To Police”
https://www.pedestrian.tv/news/pick-up-a…to-police/

On Facebook, a group said the data sheets targets women “for murder”
https://zh-cn.facebook.com/TheREDHEARTCa…1863626518

And the cuckfuck media gobbles it up to shit out these above articles.

And given how cuckolded universities are, they side with the freakshows: 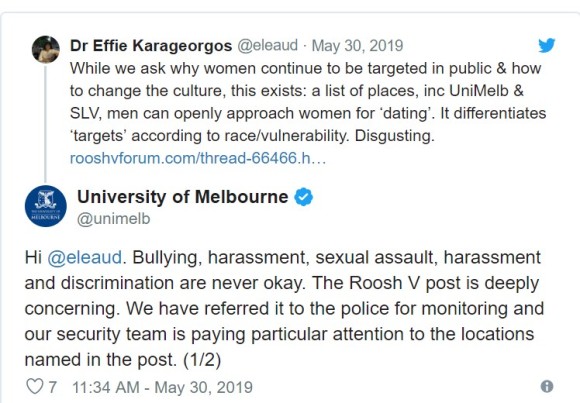 It’s always the undesirable leftovers that complain the hardest about “rape culture” and “Creepy men” perhaps it’s their justification of never getting any male attention. It’s just like how Children sabotage their friends when they are enraged, “If I don’t get any attention, nobody does!”

A growing number of international students at an elite Melbourne university are being violently robbed.
Chinese students at Monash University are falling victim to gang violence in the suburban suburb of Clayton – having their wallets, phones and credit cards stolen.
In the last 18 days police have been notified of 13 separate attacks on people as young as 19 to as old as 55, the Herald Sun reported.
Kuan Gao, a 19-year-old Chinese student, had his iPhone and wallet stolen from him by three African men at night when he was walking near the university on April 18.

‘They said very urgently “give us your wallet.” In the meantime, one guy asked me to reset my iPhone settings. I knew they were going to rob me,’ Mr Gao said.
He said he wasn’t able to run away because they blocked him, and the road was too long.
The mugging problem in the area is so bad that there’s even posters telling people to beware of thugs.
‘Warning: Take care when walking through laneway. There have been several incidents of ­assault and burglaries,’ the sign reads.

Mr Gao said he is now forced to take Ubers home at night, as he needs to walk down the dangerous alleyway to get home.
Another student was mugged at knifepoint near the campus a month earlier, where his attackers even stole the jacket and shirt from his back after taking his brand new iPhone XR.
Some of the victims were subjected to assaults even after giving up their valuables.

Our cuckfuck overloads continue to push the #diversityisstrength notion whilst forgetting the downside risk in letting the lowest rung of migrants pollute the population. Instead, the war on men continues as a substitute to attack whenever possible.

3 thoughts on “How Cuckolded is Melbourne?”